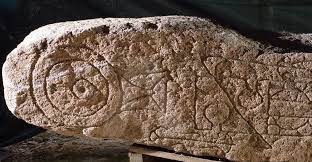 The banks of the River Spey between Craigellachie and Rothes have seen some memorable events over the centuries and there is evidence of human habitation in the area from at least Pictish times. The ruins of the once mighty castle at Rothes built by Peter de Pollok about 1200 A.D to control this part of Speyside still provide a commanding view of the river and its approach roads. The Barony of Rothes passed into the hands of the Leslie family in 1296 and on 29 July of that year they played host Edward 1 of England known to history as ‘Longshanks’ and ‘The Hammer of the Scots’. Though some less complimentary epithets have been used to described that odious man and his 35.000 strong army of Knights, Welsh, Irish and English bowmen, Irish infantry levies, and the dregs of English and Welsh prisons freed on the march northwards and pardoned in return for service in Scotland. Having earlier accepted the surrender of John Baliol at Brechin Castle, Edward was nearing the end of a ‘shock and awe’ tour of Scotland to obtain vows of fealty from the Scottish lords. He spent one knight at Rothes with his vast army camped on the Strath below the castle. The following day, the army crossed the Spey at the ford of Arndilly. The Bishop of Durham with his personal squadron of 50 knights, preceded Edward, and formed the advance guard of the royal army on the six day march to the Mearns via Mortlach (Dufftown), Cabrach. And over the Cairn O Mount to the Mearns It was on this journey south from Rothes that, on reaching Scone, he stole and carried off to London what he believed to be the ancient coronation stone of the Scottish Kings, “The Stone of Destiny”…… Silly Boy!

On the bank opposite Rothes is the site of Aikenway (or Oakenwalls) Castle so called because it is said to have been lined with oak panels, Although little is recorded about the castle’s history it is believed locally to have been occupied by a brother of Earl Leslie of Rothes. Arndilly House sits some 3 kilometres to the south on a ridge between the River Spey and the wood of Arndilly on the western slopes of Ben Aigan. The man who had the first house built 1750 on the site of what was one of the earliest Christian churches and graveyards in this area was known to locals as Black Boab o Arndilly. Described as a dour, coorse kind o mannie his bizarre choice of location seems to be suited to his dark character. When the foundations were being dug the labourers found many human bones. Boab’s brutal instruction to them was: “Teem them intae the Spey – it’ll gie the Lord something tae dae on the day o Judgement!” Desecrators be warned - for as well as the remains of the dead, Black Boab and his workmen were in their turn teemed into the waters a while later when the riverbank collapsed and all were drowned in the Spey! Sinister stories then began of mysterious goings on and ghostly hauntings. The most terrifying were tales of a dark horseman on a coal black steed frequenting the area around the old house. Some say the horseman was Black Boab being punished for his desecration of the ancient site while to others the rider was simply Auld Clootie himself. These sightings ceased ten years later when the house mysteriously burned to the ground. The present house was built on the same site by the MacDowall Grant Family in 1770 and was redesigned twice in 19th Century. During alterations to the house in 1965 about 20 skeletons for which no date could be established, were found lying in the Christian tradition, east to west, under the house. These remains lay in what was part of the burial ground of the ancient Arndilly church. No records remain of the church and burials in the graveyard. In contrast to Black Boab’s tacky handling of similar discoveries the new owners had an area by the house reconsecrated and the skeletal remains were placed in a common coffin and reburied there at 10.0am on October 5th 1965 by the Rector of Holy Trinity Episcopal Church, Elgin. They now lie in peace. At the time of these renovation works a Pictish Class1 stone was incorporated into the west gable of the house. This ancient stone is first recorded built into the old church of Arndilly, probably having stood at some point in the old burial ground, testimony to the pre - Christian peoples living in Speyside The stone is incised with two Pictish symbols: on the left a circular disc and rectangle and to the right an indented rectangle and Z-rod. fUrther evidence of the Pictish presence in this area of Speyside was unearthed during ploughing in the shape of another Class1 Pictish stone as recently as May 2013 at Dandaleith, less than a kilometre south of Arndilly. This stone is decorated with two pairs of symbols: a notched rectangle and Z-rod below a mirror and a crescent and V-rod below an eagle. All four symbols are known from other stones elsewhere across the former territory of the Picts.