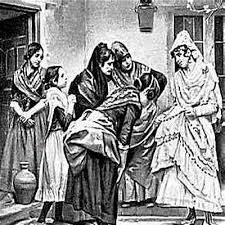 Friends helping the bride fix her dress before the big day

Winters are harsh in the area around the Mannoch road and many travellers have been caught in the fierce winter storms that frequently sweep the area. In 1684 a young couple from Knockando set out one fine morning to walk to Elgin to collect the Young Woman’s dress for their forthcoming Wedding. The couple were Mary Brown and Sandy Allan, both aged 20. They had been born on the same day in Knockando and a close childhood friendship developed into romance as they reached adulthood. The pair were to be married two days hence on the occasion of their 21st birthday. The made good time on the road and were greeted by some of Mary’s friends who would attend the dress fitting and have a wee celebration of the occasion. Sandy was not included in this part of the day and wandered around Elgin enjoying the sights and bustle of the town. He met one or two old friends and was in a grand humour when he collected Mary at the Dressmaker’s house to proudly escort her home with the precious parcel whose contents he was not permitted to see and were to remain a mystery until their wedding day. The couple, exited by the day’s events swapped stories about what they had been up to and made good time on the road home. However, as they neared Green Hill, the sky darkened and heavy snow began to fall. Mary and Sandy struggled on towards home but the snowfall got heavier and a strong wind was blowing into their faces making it difficult to see their route home. The pair decided to seek shelter in some rocks that stood in a belt of trees at the side of the track that was now covered by ever deepening snow. The couple huddled together wrapped in their plaids for warmth and settled down to wait out the storm. The storm continued all the rest of the day and into the next. An alarm was raised in Knockando when the couple had not arrived overnight and some men of the village set out to find pair of them. Sadly it was Mary’s father who found their bodies some five miles from home. Huddled together still, the couple had frozen to death on the eve of their wedding. The wedding dress lay unwrapped between them and it was a very sad search party who carried the young lovers homeward. Mary and Sandy were buried together in Knockando churchyard where a memorial stone marking their resting place was barely legible in 1880.