The Rose and the Wolf

Mary Leslie was the only child of Robert Leslie, an early laird of Rothes Castle, and hers is one of the most romantic and enduring Speyside stories. Mary’s mother had died in childbirth, an all too common event back then. Jenny Hossack, a young serving lass at the castle was entrusted with Mary’s care as both wet nurse and foster mother to the bairn. So faithfully did Jenny discharge these duties that she never left the lassie's side and through time Jenny became her most trusted companion and confidante. Together they spent many joyful hours walking and riding over the wild woodland paths by the Conrock hill and through the vast hunting forest of Sourden that surrounded the castle at that time.

(1) Tobar Tombnaich:   Toprun Well, Lady Well , Fairy Well: This Holy Well was frequented by devotees since before Pictish times. Traditionally people threw into it their offerings of beads, pins, and other personal ornaments appealing to their gods for good health and good fortune. Different generations have known it by different names and is now called the Fairy Well. Sadly it is hidden under a concrete cover.

(2) The Wolf of Badenoch:   Alexander Stewart, 1st Earl of Buchan, more commonly known as the Wolf of Badenoch, lived from 1343 to 24 July 1394. He was the fourth illegitimate son of the future King Robert II of Scotland and of Elizabeth Mure of Rowallan, but became legitimated in 1349 upon his parents' marriage: he was also the younger brother of the future Robert III. It is said that Alexander fathered 40 illegitimate children with various women.  Alexander was a guest at the “House of Rothayes’ towards the middle of the 14th. Century.

(3) The Lovers grave:  The grave and marker stone of Mary and Malcolm is lost to us now as the ancient church and graveyard of Arndilly was destroyed when the first Arndilly House was built on the site. 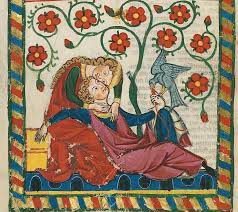 "In death they were not divided"