By Knockando Kirk and just to the north of Mannoch cottage the road passes by the Shean o Mannoch, the largest of the many Fairy Knowes to be found in the area between Knockando and Dallas. Sheans were often home to the mysterious wee folk, or fairies, who lived in many parts of Scotland. They had little contact with the local population and were in the main deemed to be benevolent, gentle and fun loving craturs. On Whitsunday in the year 1811, a local man, John Cummings of Wester Elchies entered into a 19 year lease of Cardhu Farm, on the slopes of the Mannoch Hill where the peaty ground softened the water that John, and his wife, Helen, used in the production of a rather nice whisky which they made every year after the harvest was gathered in. So popular was their produce that Helen would often walk, barefooted, up the Mannoch road to Elgin where there was a drouthy and eager market for the whisky that she carried with her. Helen would also sell bottles through the farmhouse window to the good folk of upper and lower Knockando as well as travellers on the Mannoch road. The Authorities however had a very dim view of the illicit whisky trade in Speyside and John was convicted three times for illegal distilling. Helen kept an ever watchful eye open for any signs of the excise men who scoured Speyside in an attempt to put an end to the trade. She would hang out a red sheet to warn travellers and locals of their prescence. One bitterly cold winter’s night a blizzard was howling about Carn na Cailliche and the Mannoch road as Helen was making the whisky. To her surprise she heard a faint knocking at the door of the farmhouse. Warily, she opened the door slightly, then fully, to allow the wee mannie standing outside to enter. The mannie cut a miserable little figure as he crouched by the fireside, his coarse woollen clothing was soaked and was soon steaming in the welcoming heat of the peat fire. Snow melting from his woollen bonnet and the tiny shoulders of his coat gathered in little pools around his feet that were clad in what looked like rabbit fur boots. His hands shivered as hef umbled inside his coat and drew some tobacco for the clay pipe that he took from his coat pocket, The cottage was filled with the sweet odour of the tobacco as the wee mannie puffed contentedly at his pipe for a few quiet minutes before downing his whisky in one gulp and then throwing the empty quaich into the fire. The fairy, for fairy he was, stood and looked at Helen with a cheery smile and a twinkle in his eyes before blessing her with the words: “ brew wifie, brew !............for you and yours will never want!” The unexpected guest then left the farmhouse and a bemused Helen watched as the wee, bedraggled figure faded into the dense blizzard, headed in the direction of the Shean. As the years passed the fairy blessing was seen to come true as once Whisky making became legal under license they established the nearby Cardhu distillery and their business expanded until the family sold it on to a major distilling company many years later. 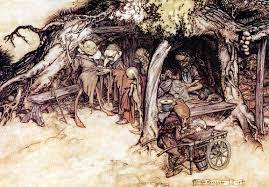 A working day in the Shean o Mannoch

Winters are harsh in the area around the Old Mannoch road and many travellers have been caught in the fierce winter storms that frequently sweep the area. In 1684 a young couple from Knockando set out one fine morning to walk to Elgin to collect the Young Woman’s dress for their forthcoming Wedding. The couple were Mary Brown and Sandy Allan, both aged 20. who had been born on the same day in Knockando and a close childhood friendship developed into romance as they reached adulthood. The pair were to be married two days hence on the occasion of their 21st birthday. The made good time on the road and were greeted by some of Mary’s friends who would attend the dress fitting and have a wee celebration of the occasion. Sandy was not included in this part of the day and wandered around Elgin enjoying the sights and bustle of the town. He met one or two old friends and was in a grand humour when he collected Mary at the Dressmaker’s house to proudly escort her home with the precious parcel whose contents he was not permitted to see and were to remain a mystery until their wedding day. The couple, exited by the day’s events swapped stories about what they had been up to and made good time on the road home. However, as they neared Green Hill, the sky darkened and heavy snow began to fall. Mary and Sandy struggled on towards home but the snowfall got heavier and a strong wind was blowing into their faces making it difficult to see their route home. The pair decided to seek shelter in some rocks that stood in a belt of trees at the side of the track that was now covered by ever deepening snow. The couple huddled together wrapped in their plaids for warmth and settled down to wait out the storm. The storm continued all the rest of the day and into the next. An alarm was raised in Knockando when the couple had not arrived overnight and some men of the village set out to find pair of them. Sadly it was Mary’s father who found their bodies some five miles from home. Huddled together still, the couple had frozen to death on the eve of their wedding. The wedding dress lay unwrapped between them and it was a very sad search party who carried the young lovers homeward. Mary and Sandy were buried together in Knockando churchyard where a memorial stone marking their resting place was barely legible in 1880.