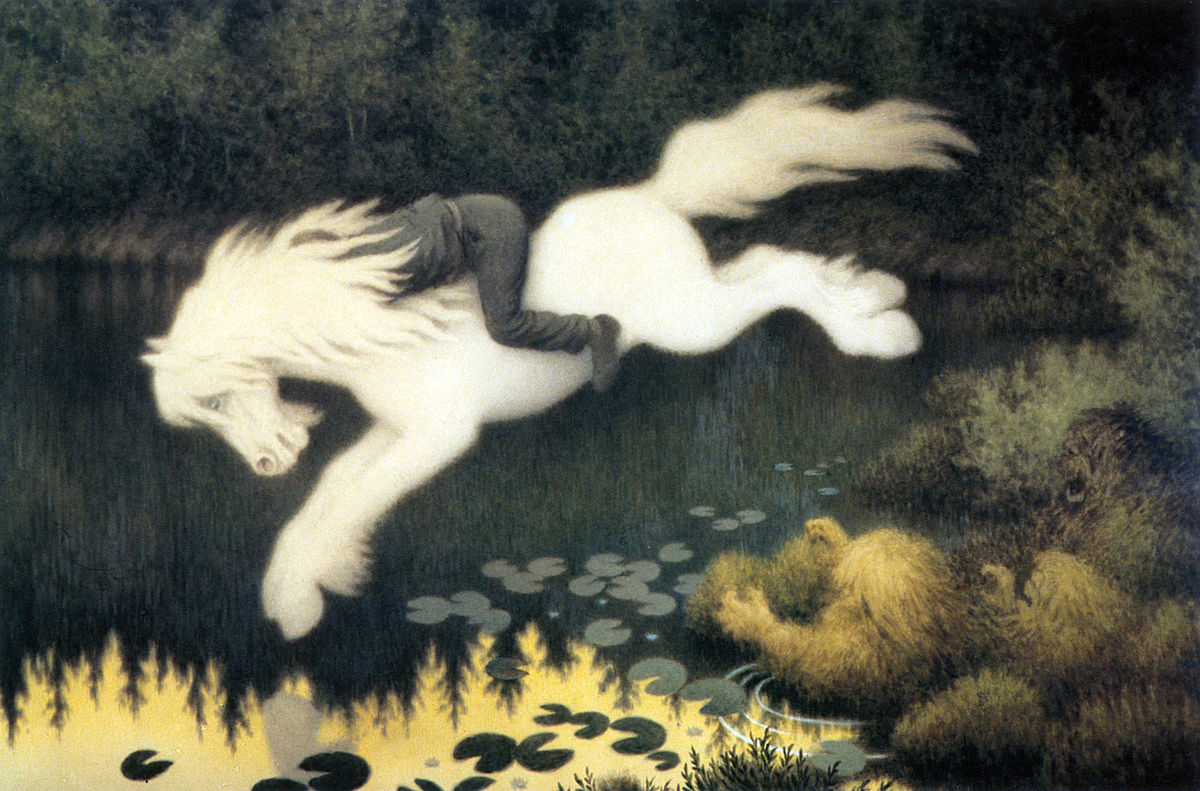 There are many deep pools in the River Spey between Aberlour and the dark, forbidding, ‘pot’ where the river bends sharply below the cliff face at Craigellachie. The western bank of this stretch of water borders the estates of Wester and Easter Elchies and it is said that long ago, in these waters, a fearsome yellow horse had its lair. This beast was very fussy and carried away only young girls, then, for reasons unknown, changed its diet and took to feeding on mature married couples. And so it was that one such couple found themselves, weary and footsore, by the old Mill ford of Elchies one dark night as they made their way home from a busy day spent at market in Elgin. The "Mill Ford," took its name from an ancient mill at Easter Elchies and the crossing here was considered the least dangerous on the river. At certain times of the year, mainly summer, it was often so shallow that foot travellers could cross the river safely. As this route was the main route from Elgin and the " Laich o* Moray" to lower Strathspey it was very popular with travellers who would often simply cast off their footwear and wade easily across before continuing their way. The couple involved in this tale were Davie Stuart and his wife Janet who lived in a cottage by Inveravon. Davie was a Souter and his skill as a shoemaker and saddler was renowned throughout lower Strathspey. Davie and Janet had walked the long hard miles to Elgin Market to buy the bundles of fine, soft leather that he and his wife were now carrying home on their backs. Footsore and weary, they reached the Mill Ford around midnight. No lights could be seen at the mill’s windows. The miller had gone to bed and no food or drink could be obtained from that quarter. The weary couple set their burdens on the bank and sat down to rest and take a drink of the cool water before attempting to ford the river whose waters were running higher than usual for the time of year. They only sat for a short, time when Davie gently nudged Janet’s arm and pointed to the bank upriver where the ford was situated. " There's the miller's shelty on the green, wi' the saidle an bridle on't. There wad be nae hairm in ridin' it ower the water. We can shoo it back at the ither side. I'll tak the leather on in front an' ye can loup on ahin' me." They walked over to the wee horsie and Davie eased into the saddle and coaxed the wee pony along the riverbank to the ford. As soon as the wife mounted, the beast took to the water in a rush and it’s form began to change into that of a large white horse. In spite of Davies best efforts, the beast turned its head down the river. The tried desperately to dismount, but all in vain. They felt as if they were being held by some dark and mysterious force to the back of the fiendish beast. Their terror increased when, to couple’s horror, the kelpie opened its mouth and let out a spine tingling scream. “Sit weel, Jannity, an' ride weel, Davie; this nicht ye’ll rest in the Pool o* Cravie!" No one knew the location of this dreaded pool was though it was well known to be the last resting place of all kelpie victims in these parts and the kelpie’s words sent an icy shiver down Janet’s back. Davie’s face drained of all colour as he realised that this would be his last day in this world. He quietly mumbled a desperate plea for aid to St. Crispin, the patron saint of Souters. “Lord presairve us a!” screamed poor, terrified Janet. Her hands clasped in prayer. Her frantic plea was hardly uttered before the couple found themselves struggling waist deep in the water. The kelpie had disappeared and they could see nothing in the river but their bundles of fine leather floating rapidly downstream. Now, Davie and Janet were honest, god fearing, people and Davie had bought a Bible in Elgin that Janet had carefully wrapped with a silk handkerchief and mutch ribbon that she had purchased. She then tied the package in a bundle on her back. This Bible and Janet’s plea proved to be the very things that had saved them from a cold watery grave. Throughout Strathspey for many a year after this incident people told how neither book, handkerchief nor ribbon were wet although Janet had been plunged in the river. Despite this hellish encounter the couple did manage to eventually reach the safety of their cottage at Inveravon without further incident. Now readers, you seem like a reasonable bunch and I would wish you no ill, So tak a tellin fae a laddie that kens! If, perchance, you ever encounter a biddable horse, a handsome youth or a bonnie lass wi a glint in her een beside any Scottish river or loch, commend your soul to your own god and walk away! Do this and you shall pass safely by, or else………..............!