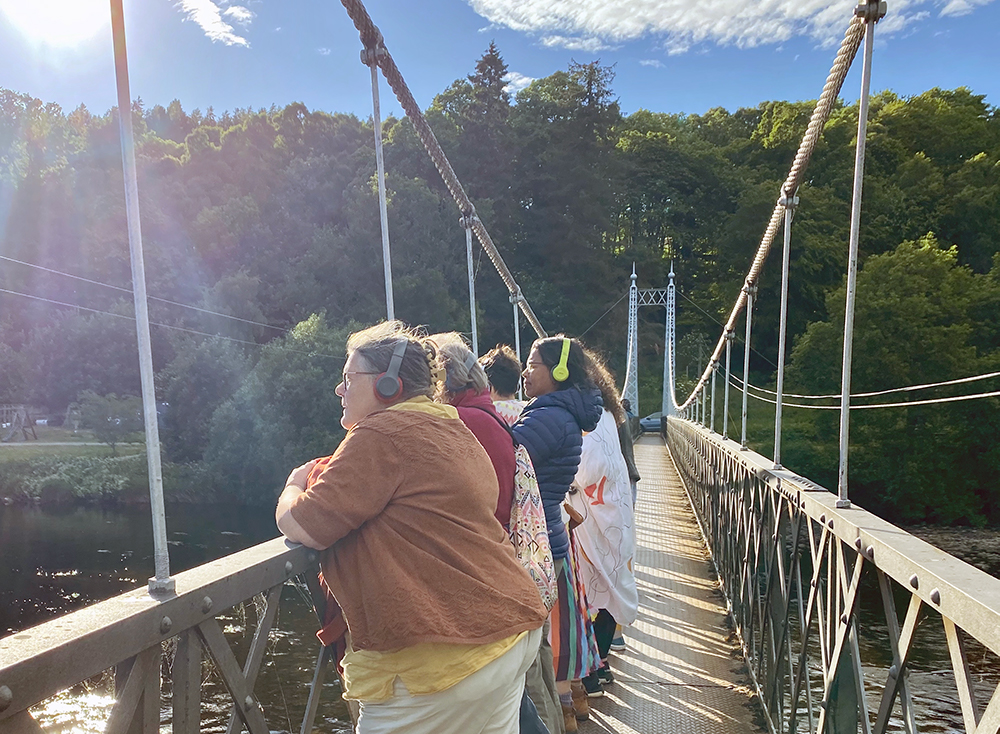 The sun begins to set as this group of storywalkers contemplatethe River Spey while listening to stories about the men who rafted logs from Rothiemurchas Forest to Garmouth and Kingston on Spey for centuries.

In the late 19th.century the ancient forestry trade boomed in Strathspey. Numerous pit-saws had been dug in the vast forest of Rothiemurchus to meet the huge demand for timber needed to feed the boom in railway construction, initially in England and later in Scotland, demand was high. In the winter time crofters and farmers found employment in the forests. They would drag the felled trees to the nearest pit-saw where the timber was cut into railway sleepers. A lack of real roads and railways in Scotland meant that the sleepers had to be floated downriver to Kingston and Garmouth by means of great rafts. The size of these rafts varied depending on the water level in the Spey. The higher the water, the greater the number of logs. Loads of a hundred and fifty to two hundred sleepers on one raft were common. Each raft was constructed and guided by men known locally as timmer floaters. Each man was equipped with only a cleek. This was a 12 foot long wooden pole with a hook and point on one end that a skilful floater could use to steer his raft and prevent it running into hazards of which there were many on the 40 mile journey downstream. Among these hazards is a notorious pool on the Tulchan estate where the water level drops by three feet and a number of large rocks and boulders lurk in the river just beyond. In 1798 two young brothers from Knockando, John and William Margach, were floating a raft of logs from the Rothiemurchus forest to Kingston on Spey. Their raft was snagged on the dreaded Rock o Tamdow, just above the point where the Knockando Burn tumbles into the Spey. It was only after much effort and manoeuvring of their load with their cleeks that the brothers eventually worked the raft free but a result of this delay, John and William were late in reaching their destination and as they neared Garmouth a strong current was running over the bar of the river as the tide ebbed. A large boat was moored between the mouth of the Spey and the bar, her mooring ropes stretched out wide over the water for quite a distance. The raft was now in the grip of the strong current and was being drawn under the mooring ropes of the wooden vessel with the floaters unable to steer the raft to any great effect. The mooring rope was too high to snag the raft but caught the two helpless brothers who sat atop the timber . The lads were both tumbled from the raft and tragically swept to their deaths. Their bodies were never recovered. The floaters were certainly a tough bunch who wore no protective clothing, just their day to day wear of mainly woolen clothes that were permanently wet as the men were always up to their knees and frequently, deeper, in water.  A lad with a cask of whisky would accompany the rafters and a wee dram was taken at each halt on the journey. It is said that these men never suffered from colds and, because their feet were always wet the floaters were never bothered with corns. A hardy bunch of boys  right enough and fit as butcher's dogs with all the exhausting physical toil they undertook every day.