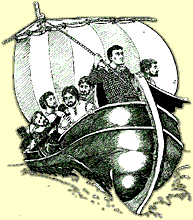 Saint Drostan and the Picts

The name Aberlour comes from the Gaelic translation of “Mouth of the Chattering Burn”. The original name of the parish was Skirkdustan from Sgurr (Gaelic) meaning to cut or divide, and Drostan or Dustan, the monk from Iona who brought Christianity to the Pictish peoples of the area.

Details of Drostan’s early life are few and there are conflicting accounts regarding his origins. Drostan is said by some to have been of Scottish birth, being descended from King Aidan of Dalriada, the friend of St. Columba. The early Scottish Historian Fordun says he was a Briton, the son of St. Monnena and Conrad, prince of Demetia, now part of South Wales. His name appears in a few different places, and his life story seems to be a mixture of the lives of two different legendary monks who shared the name. He was also known as St Drust, Trust, Throstan or Drostán mac Coscreig of Deer. Whatever his origin, he became the pupil of St. Columba or Columcille, at the monastery of Iona and accompanied that saint to the district of Buchan where, together they landed at Aberdour in or around 575 A.D. It is recorded that: “ Columcille and his nephew Drostan, son of Cosgrach, his pupil, came from Hi (Iona), as God had shown to them, unto Aberdobiar, and Bede, the Pict was Mormaer of Buchan before them and it was he who gave them that town in freedom forever from Mormaer and toisech.” Bede had initially been hostile to the monks but Columba is reputed to have cured his son from illness nd this changed his view of the newcomers. In theory at least, the authority of a Mormaer was second only to the King of Scots, and senior to that of a toisech , which made this grant of land to Columba very prestigious and confirmed the acceptance of the church in Buchan” So it was that Columba and Drostan founded a monastery at Old Deer (or Deir) in the Pictland of the 580s. Legend has it, that when Columba left to return to Iona, Drostan shed tears (Deara in Gaelic), which caused Columba to name the town Dear. It was here that the earliest surviving Scottish Gaelic text, the Book of Deer was written, in around 900. The grant of land from Bede to the church, free of the authority of the provincial ruler, was the first of many made by the Pictish peoples of the area and Drostan, with his three companions, Colman, Medan and Fergus, travelled south, bringing their new religion to the people. Near the mouth of the Lour burn they founded a 'muinntir' or early monastery, a rude building of mud and wattle with a heather thatched roof.

Drostan and his companions lived in a cave in the rock face behind the site of the present Aberlour Distillery. St Drostan’s well, now contained within the distillery buildings was the source of the water used in the baptism of the Pictish converts to Christianity.

The water of St. Drostan's Well is now an important ingredient of Aberlour Single Highland Malt Whisky. Local tradition says that the Elm trees along the banks of the nearby burn were planted and used by the monks. Elm wood is very resistant to water and was used for water pipes, pumps, troughs, small boats, coffins and piles under bridges and houses. Indeed, much of Venice is built on alder piles. The two other main uses of alder wood are for charcoal making clogs.. Clogs made from alder wood were light, easy to wear and absorbed shocks well. A manuscript in the library at Blair's College, Aberdeen, states that: "The monastery of St Drostan, commonly Kil Drostan, now Aberlour, was situated on the right bank of the River Spey" where the cemetery now is "and there his relics were garnished and kept with great veneration." Interestingly, the site mentioned here is on a low, raised mound and it is open to speculation that Drostan chose this site because it was a sacred site to the Picts and had been since earlier times. It has been suggested that Columba gave charge of the monastery at deer to his pupil because Drostan could speak the language of the Picts. He certainly seems to have been successful in his dealings with them. Drostan died in the (old) abbey in Deer, around 606 A.D. His relics were translated to the church at Aberdour where miracles were wrought at his tomb. His holy well lies nearby. St. Drostan's Fairs were held in mid – December each year at Rothiemay, Aberlour (for three days) and Old Deer. The last named, formerly lasted for eight days. In 1218 -1219, a Cistercian abbey was erected in New Deer by the first Earl of Buchan in favour of the one Drostan founded with St. Columcille. Contemporary account of the Monks of the Celtic Church 6th – 7th century CE

” They were rich in virtue, living in peace at their house, studying beautifulness. They were men of mercy whose godly deeds have not failed; Their bodies are buried in peace and their name liveth from generation to generation ”